Many graphic designers are so excited when a new shiny prospect contacts them that they miss a crucial step: screening the prospect. But having a vetting process is vital, so you can position yourself as an expert and evaluate the prospect and the work before taking it on. Here are 6 reasons freelance designers should screen prospects and how to evaluate them.

Why Freelancers Should Screen Prospects

1. To show you’re not waiting around.

You could consider implementing your screening process before a prospect even reaches out to you by having a form on your site with an “Apply now” button. This tells prospective clients you don’t just work with anyone—whether that’s true or not. It also makes it seem like you’re in demand and highly sought after.

2. To fend off potential problem clients.

Problem clients are those that disrespect you in some way. As I’ve mentioned in previous episodes, respect isn’t just about politeness. One way that prospects can show you respect is by following your process from the very beginning.

For instance, I ask prospects to fill out a short questionnaire on my website or via e-mail. If they call instead, I usually direct them to the form or e-mail them the questions. Then I evaluate their answers. If they and the work seem like they would be a good fit, then I reach out and ask that they schedule a call via my Calendly link.

Now, most people have told me they love this, they’re impressed by it and find it all a very easy, streamlined process to follow. However, a couple prospects have balked, stating they prefer a call up front and didn’t want to use my scheduling link.

Well, that’s OK because that’s not how I work. I explain that providing this information up front will make our call more productive. That gives me time to check out their website, learn more about what they do and what they need done, so I can then prepare any questions I might have in advance of our call.

Usually if they aren’t willing to do those things, it’s a sign they will be difficult to work with later in the process. They aren’t looking to be lead; they want to lead.

The point is that you’re showing you’re an expert with a process, and you’re not at the whim of every prospect. You’re testing them out, and you usually want to avoid the ones who are trying to test you out just to see if they get their way.

3. To evaluate whether or not you should take on the work.

As I mention in episode 45, 14 Reasons Graphic Designers Are Seen as Order Takers, taking on any and all work can actually cost you more than you get paid. It might require you to spend a lot of time understanding what’s involved or you may mess up something in the process because you’re not aware of everything that is involved to get the job done right. So it can end up costing you time, money and your reputation.

4. To see if you want to work with this person or organization.

But it’s a two-way street. You too have a say in whether or not you want to work with this person or this organization. As a freelancer, you are not obligated to work with everyone.

Maybe this prospect’s mission or business values go against some of your beliefs, which may be religious or ethical beliefs that you hold. For instance, I’ve spent all of my life rescuing dogs and helping rescues and shelters, so if a dog breeder were to contact me, I would politely decline.

Once, many years ago, I was contacted about designing a magazine that would feature semi-nude women in provocative poses. Um, no thanks. Not a good fit.

If you’re a vegan, maybe you wouldn’t want to do work for a company that sells meat products.

5. To save time and effort and find out if they can afford you.

Part of the screening process should involve the money talk. Talking money up front is what experts do, and it helps you find out if you should even consider spending time providing an estimate in the first place.

Now, some prospects may simply not have the budget—or an expectation of cost that would align with what you would charge for the work. Otherwise, it may be a case of them not valuing the work.

Oftentimes, clients looking for cheap work will say they want something “simple” or “basic.” They talk about the work as if it’s meaningless, that there’s not much involved. That usually means they have no budget or are just unwilling to spend much. They just don’t see the value in the work.

If they say they’re looking to spend $50 for a logo design, and your rates for that start at $2,000, you don’t want to waste your time writing up an estimate or a massive proposal that they will only end up declining.

Sometimes prospects might be trying to find out what to budget for. I once had an organization contact me about a website design. Their expectation of cost was way out of alignment with what I told them I would charge for what they were asking. So imagine my surprise when, several months later, they contacted me again to say they had raised the money and were ready to get it done at the rate I had told them.

Talking money up front also gives you an opportunity to say that you still might be able to help them out, but on a smaller scale or in smaller ways over a period of time, rather than all at once, if either of those options is indeed possible and if you’re interested in doing that at all.

But that way, you’re not writing up a proposal for this gargantuan project that they cannot afford and you’re focusing on what you’re able to do for them in that price range.

6. To find out if they are serious or just shopping around.

This goes hand in hand with what I just explained in the fifth point. If the prospect is just shopping around and they’re not really serious, they’re usually hesitant to spend much time talking to you or sharing information about their needs or their business when you ask for it.

If they balk when you request a call or ask questions before providing an estimate, then it means they don’t value your expertise and are just looking for an order taker. They’re also probably looking to pay by the hour—and a low rate at that.

Or maybe they just don’t know enough to share with you. That’s a problem too. That often means you aren’t dealing with the decision maker, which is vital so you don’t rely on someone else to do the selling within their company for you.

How to Evaluate a Prospect

After you’ve talked to a prospect and have gotten more information, it’s time to evaluate the organization and the opportunity. Some questions you can ask yourself are (and you could make a worksheet of them to have in the future):

Many years ago, another graphic designer contacted me after seeing work on my site from a mutual client. While I hadn’t experienced any issues up to that point, I learned that this designer had been stiffed by this client.

I hope that you now understand how implementing some form of a screening process can really help you. Working with a client who isn’t a good fit can be a really stressful experience, and that only results in both parties feeling resentful—and that means you won’t be asking them for a testimonial, you won’t get future work from them and they won’t refer you to others. So it’s a wasted opportunity. 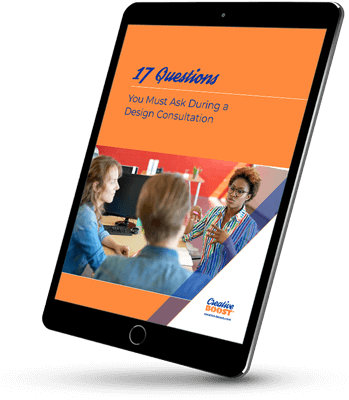